When we took over the property four years ago there was already an established orchard with about 20 fruit and nut trees of vary ages. Beneath the trees was a broad area of fairly uniform grass that had been grazed by sheep and a small plot of abandoned vegetable garden.

Initially, based on the little horticultural knowledge I had, all I did was prune the trees a little. But as I became exposed to and tuned into the forest gardening and food forest philosophy and concept I realised there was so much more potential.

The past two years have seen some radical changes, with so much more to come. The reward is is watching how natural systems re-enforce and enrich spontaneously.

A large part of my approach is based on making use of the materials at hand and not spending excessive time / money / energy to obtain resources from far away. While this is a good idea in theory it struggles to be practical when working on large areas for the volume of  material required is so high. Using insufficient mulch results in additional effort to remove weeds later or remulch.

Details  After contourscaping to retain rainwater run off from the nearby garage roof I removed a lot of the grass and mulched with the branches pruned from the trees. This was not as successful as intended as there wasn't sufficient material to create a good thick later.
This is in the process of being planted up. Recently added green tea plants to complement the existing strawberries and saffron bulbs. 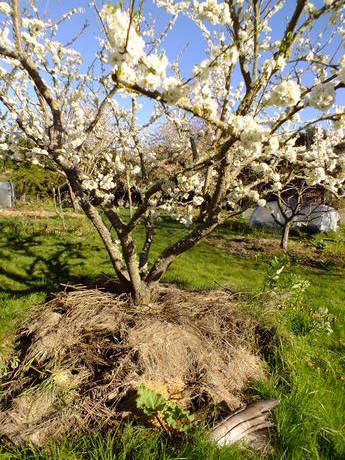 Working with what little I had at hand I decided to try and see what I could get away with. Here I have used old cardboard boxes covered with dry and rotten willow logs, cut broom and grass. 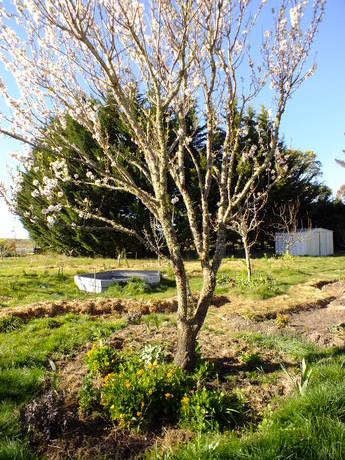 Details  After pruning this tree back quite drastically I mulched and planted bulbs and herbs. I also got a small crop of potatoes from under the mulch in the first season. Now, the tree seems to have regrown in 2 seasons. On a number of occasions I have found seedling almonds coning up in the garden beneath and have carefully potted them up for later transplant. The oldest of these is now 2 meters tall and covered in flowers. Exciting stuff.

Converting the area under the plums

Details  There is a shady area under a bunch of plum trees that was all grass. There is still plenty of grass but it has been broken up and made more manageable with several swales, all planted up with berries and ground cover.

Details  This tree has done very well since the grass was removed. In it place is rhubarb, dill, mint, black current and lavender. 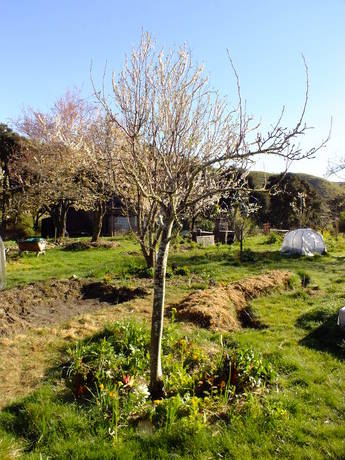 Details  This tree is looking pretty good although I need to extend the area of 'garden' beneath it as the tree has grown. Under planted with silver beet, garlic, radish, coriander, nastursum and strawberry.
Trunk is on a bit of a lean due to strong winds before shelter grew sufficiently.

Details  All grass pulled out. Seeded with an assortment of herbaceous plants including clover, lucerne, plantain, chickory, calendula, poppies and coriander. Also has a ring of bulbs and chives. Drip line mulched with grass from the chicken house.

Details  This was an early attempt at eradicating the grass beneath an existing tree. The mulch layer was too thin and the grass persisted somewhat. However there are plenty of other things getting a foothold including, mint, chives, broad beans and comrefy.