This species is a hybrid and will not breed true from seed, though some interesting new fruiting cultivars can be produced.. It is best sown as soon as it is ripe in the autumn in a cold frame. It usually germinates in late winter. Stored seed requires stratification for 3 months at 1°c and should be sown in a cold frame as soon as it is received[12]. It might not germinate for 12 months or more. Prick out the seedlings into individual pots as soon as they are large enough to handle. If given a rich compost they usually grow away quickly and can be large enough to plant out in late summer, though consider giving them some protection from the cold in their first winter. Otherwise, keep them in pots in a cold frame and plant them out in late spring of the following year.

Cuttings of mature wood, November in a frame[13].

Cuttings are often grafted to dwarfing rootstocks to keep the canopy low enough for easy harvesting.

An easily grown plant, it succeeds in most fertile soils, preferring a moisture retentive well-drained loamy soil[14][12]. Grows well in heavy clay soils, though if these are poorly drained there could be problems with diseases such as canker[12]. Prefers a sunny position but succeeds in partial shade though it fruits less well in such a situation[14][12]. Tolerates a pH range from 6 to 7, preferring a range of 6.5 to 6.8[12].

The apple is one of the most commonly cultivated fruit crops in the temperate zone. The primary climatic requirements for the production of good quality fruit are warm summer temperatures, relative freedom from spring frosts, reasonable protection from the wind (especially cold north and east winds) and an evenly distributed rainfall of about 600 - 800mm per annum[12]. Good apple production has been achieved as far north as 65°, whilst about 1000 hours of winter temperatures below 7°c are necessary to initiate flower production[3]. However good quality apples can still be produced in other areas with careful management and choice of cultivars[12]. Even in tropical latitudes, the plant has succeeded at high elevations, producing fruit at elevations over 3000 metres in Ecuador for example[3]. Where space is at a premium, or at the limits of their climatic range, apples can be grown against a wall. Most cultivars will grow well against a sunny south or west facing wall, an east facing wall will suit many of the tougher cultivars and even a north facing wall can be used for early culinary cultivars[15].

A hybrid of mixed origins, including M. dasyphylla, M. praecox, M. pumila, M. sieversii and M. sylvestris, this species is very commonly cultivated in temperate areas for its edible fruit[13]. There are very many cultivars[5][16][12] and with careful choice of these cultivars it is possible to provide freshly harvested fruit from July to December and stored fruit for the rest of the year.

Growing apples near potatoes makes the potatoes more susceptible to blight[17]. Apples store better if they are grown in a sward that contains a high percentage of clover[17].

Hybridizes freely with other members of this genus[12].

Details  Existing apple tree that we under planted with rhubarb, strawberries and bulbs as permanent plantings and then an assortment of self seeded annuals from the previous year.
View map 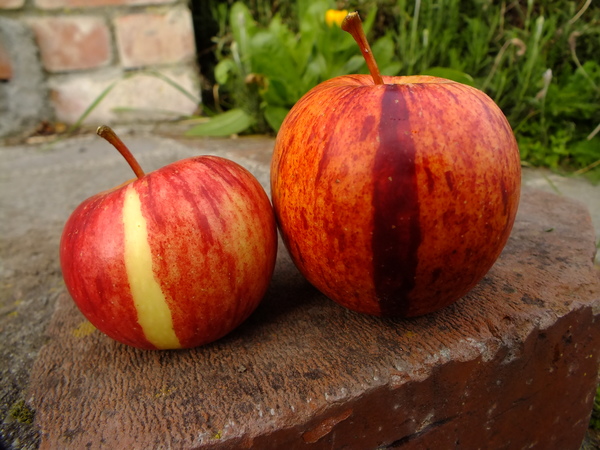 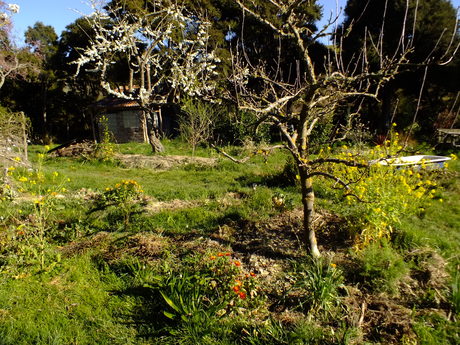 Located in a damp spot and surrounded by twitch grass, the ground under tree has proven more difficult to control. Currently there is rhubarb, chives, strawberry and some self sown mustards.... and quite a bit of grass.
Height (m)  2
Tags    apple
View map

Details  A yellow green skin with some russeting. A juicy, aromatic apple with, creamy white flesh with a firm texture. Flavour is a combination of apple, pear and banana with a touch of anise and liquorice.
Options  Prefer smaller diameter, Prefer larger diameter, Any diameter
Price  $3.40  Each
Price for 2 or more  $2.90  Each if you buy 2 or more
Tags    fruit  graft  scion
Out of stock

Details  Heritage variety introduced in the 1850s in the Netherlands. Large fruit suitable for cooking or eating fresh.
Options  Prefer smaller diameter, Prefer larger diameter, Any diameter
Price  $3.40  Each
Price for 2 or more  $2.90  Each if you buy 2 or more
Tags    fruit  graft  scion
Only 5 in stock Order 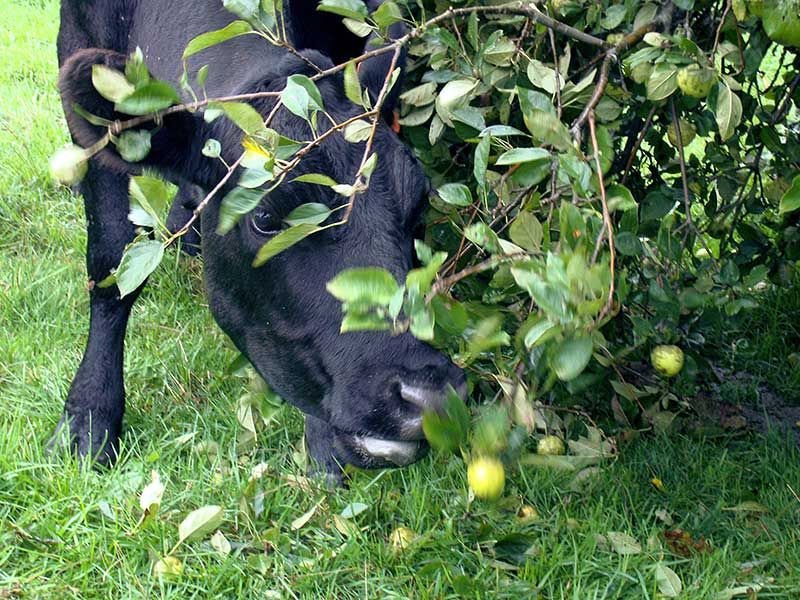 By now it should be obvious that we need more trees in our landscapes, however inconvenient that may seem. The benefits are numerous. Using trees for supplementary animal feed is a smart strategy in drought prone areas. This includes:
Once established, trees are long lived with a deep root system capable of funding moisture in dry times. Large volumes of edible material can be produced, along with all the other benefits provided by appropriate species of trees.
trees  animals