Kowhai is a small woody legume tree native to New Zealand. There are eight species. Sophora microphylla is the most common, and has smaller leaves and flowers than Sophora teraptera. Kowhai trees grow throughout the country and are a common feature in New Zealand gardens.

Most species of Kowhai grow to around 8 m high and have fairly smooth bark with small leaves. They have horn-shaped yellow flowers, which appear in early spring. Their nectar is a favourite food for Tui, Bellbird and KererÃÂ« (New Zealand Wood Pigeon). The pods which appear after flowering each contain six or more seeds. Unusually for New Zealand plants, some species of Kowhai are deciduous, losing their tiny, dull green leaves each winter.

South Island Kowhai (Sophora microphylla)
The kowhai is a well known tree that has bright yellow flowers in spring. The flowers contain a large amount of nectar in the flowers which makes them very popular with native birds, particularly tui and bellbird. Native pigeons eat kowhai leaves. Plant kowhai’s to attract native birds into your garden.

Maori used the kowhai to help determine when to plant kumara, i.e. when it flowered in the spring. The wood of the tree was used to make paddles and the head of axes as it was very sturdy. In Southland kowhai’s would have been found on the banks of almost every river and stream; that is where they prefer to live. The kowhai is famous for its bright yellow very hard seeds.

Because kowhai lived on riverbanks the seeds would drop into the water and float great distances before settling into sand and growing. To get kowhai seeds to grow you must soak them well in water first.

Seed - best sown as soon as it is ripe in a greenhouse[5]. Pre-soak stored seed for 12 hours in hot (not boiling) water and sow in late winter in a greenhouse[6]. Prick out the seedlings as soon as they are large enough to handle into individual pots in the greenhouse, and grow them on for 2 years under protected conditions. Plant them out into their permanent positions in early summer of their third year.

Cuttings of young shoots with a heel, July/August in a frame[7].

Succeeds in a well-drained moderately fertile soil in full sun[5]. Requires a warm sheltered position[8]. It grows best in the warmer areas of the country where the wood will be more readily ripened and better able to withstand winter cold[9].

Hardy to about -10°c[5], it succeeds in the open in southern and south-western Britain but is best grown against a wall elsewhere[7][10]. Plants are of slow to moderate growth[8]. In good summers plants set abundant seed in this country[9]. Plants should be container-grown and planted out whilst young, older plants do not transplant well[9]. Plants in this genus are notably resistant to honey fungus[5].

This species has a symbiotic relationship with certain soil bacteria, these bacteria form nodules on the roots and fix atmospheric nitrogen. Some of this nitrogen is utilized by the growing plant but some can also be used by other plants growing nearby[5]. 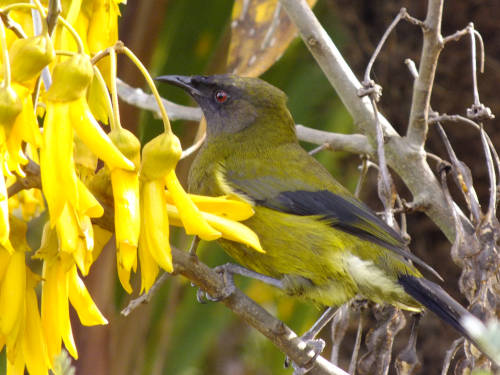 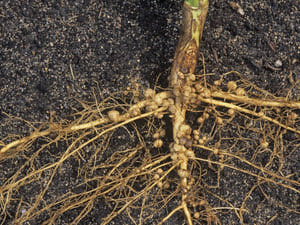