ORIGIN: It is a naturally occurring hybrid between the mountain pawpaw and the Chamburo, and originates in Ecuador. It has been cultivated there since before the arrival of Europeans.

PLANT DESCRIPTION: It is an herbaceous shrub, similar to the pawpaw, but the fleshy stems are darker and shorter. It grows to 2-2½ metres. The thickness of the trunk is associated with the vigour of the plant. The leaves are 30-60 cm wide, smooth and hairless with broad lobes. The leaves have an average life of 4-6 months. The plants produce female flowers only (usually solitary on the end of a long pendulous stalk), and no male trees or pollen are required for Babaco to fruit. It is not a long lived tree (4-8 years) but it is ornamental, easily propagated from cuttings and on the right scale for a small garden. It could also be grown in a large container.

FRUIT DESCRIPTION: Each fruit is borne on a long stalk, and grows up to 30cm long by 10 cm wide with 5 longitudinal ridges (distinctly 5 sided and pointed). Each can weigh up to 2kg, and they are generally seedless, juicy and fragrant. The fruit turns from green to yellow at maturity and is rich in vitamin C (a 100g slice contains about the same as an orange). The flesh is about 50cm thick and creamy white and the thin skin is completely edible. It also contains 3 times as much papain (a digestive enzyme) as common paw-paws.

FRUIT TASTE: It has been described as a blend of pineapple and pawpaw (and banana & strawberry?) but because of low sugar content, it may not compare well with the sweeter flavoured pawpaw. It is light, acid and slightly effervescent (hence it’s other name “champagne fruit’).

FRUITING AGE: Fruit is produced about 15 months after the cuttings are planted out.

FRUIT USES: Its juice is a popular drink in Ecuador. The fruit is eaten raw when yellow or the green fruit can be used as a vegetable, though it needs to be well cooked (best in curries or made into chutney). Babaco syrup is also sold commercially in South America. Pieces of the fruit can be added to fruit salads. Babaco can be processed in a blender with sugar/honey as a drink, or with ice cream/frozen yoghurt as a milkshake. The latex (like that of paw-paws, figs etc) is quite corrosive when liquid and should be wiped away or allowed to dry up if the fruit is to be eaten raw. The riper the fruit, the less of a problem this is. This latex is an excellent remedy for warts and can be applied to the wart several times a day until it is burned away. The Incas used Babaco to treat obesity and stress problems. The enzyme papain emulsifies fats and breaks down cholesterol and protein. Papain is an ingredient of commercially produced meat tenderizers. Because of its low sugar content, it is perfect for slimmers.

CLIMATE, RAINFALL AND TEMPERATURE: It grows between 2000-3000 metres in Ecuador, and is moderately cold tolerant compared to pawpaw, with a temperature range of 5oC to 20oC. It fruits in temperate climates where paw-paw does not ‘set’ or ripen. The optimum humidity for growing Babaco is 75% -85%. The plant is sensitive to high temperatures and low humidity. Temperatures over 30oC may result in sunburnt fruit and internal water stress, even though adequate irrigation is provided. Plants exposed to full sun in these conditions may drop most of their immature fruit in an effort to conserve water. The plants must be protected from strong winds. If the summers are hot you could try growing Babaco in large containers and move them to a cooler location in the warmer months. They can set fruit indoors as well as outside. Plantings should be done between September and March.

FROST TOLERANCE: Babaco can withstand a few degrees of frost, but are more susceptible to root rot if they have been injured by frost. To avoid blemishes and cold/frost damage, New Zealand Babaco growers cultivate the plant in greenhouses with controlled temperatures.

SUN OR SHADE:  A sheltered spot with broken shade in summer and sun in winter would be similar to its natural home in open forest. It won’t set fruit if it does not have a reasonable amount of sun. Shadecloth may be needed to minimize summer temperatures here.

SOIL PREFERENCE: It prefers well drained soil with plenty of humus/ organic matter and a pH. of 6-6.5. The plant will not tolerate salty water or soil. If the plant is grown in a container, then the potting mix should contain a large proportion of perlite/bark etc, rather than peat moss which is too water retentive.

DRAINAGE: Babaco is subject to root rot if the soil is poorly drained or heavy clay.

WATER: Water sparingly after planting as the roots are especially sensitive to excess watering just after transplanting. After that, the soil should be allowed to dry partially between watering. Overhead watering increases the risk of fungal infection and splitting of near-ripe fruit, so microspray or minisprinkler irrigation is considered best. Babaco plants require ample water for optimum production, but they dislike wet soil.

MULCHING: It prefers matured compost or leaf mould rather than manure. Mulch is important as the roots will grow up into the organic matter for nutrients and air.

WEED CONTROL: The mulch will suppress weed growth. Herbicides should be used with caution and should not come in to contact with the extremely sensitive tissue of the Babaco trunk.

FERTILIZING: A slow release fertilizer at planting time is desirable. Under fertilized plants produce small fruit. The plants have a high phosphate requirement (N:P:K of 1:3:1). [Some New Zealand growers have suggested 15:10:10]. Chicken litter is considered an ideal fertilizer as it is high in phosphate and has the advantage of increasing organic matter (5-10 kg per sq. metre per year is suggested. Plants also need an adequate supply of calcium (gypsum or ground limestone) depending on your soil. Boron, zinc and other trace elements need to be applied for best results.

FLOWERING: Flowers will appear soon after the first Spring growth and some should set fruit. Flowers form on new wood only. Sunlight intensity, temperature and day length variation all affect flowering and hence fruiting.

FRUIT DEVELOPMENT/HARVESTING:  The fruits ripen in progression from the lowest fruits, usually the heaviest, to those higher up the trunk. These smaller fruit constitute up to 10% -20% of the crop. The plants will need staking to prevent straining under the load of developing fruit. They are shallow rooted and are easily blown over when fully laden with fruit so wind protection is essential. It takes about a year to reach full size, and a further 8 – 10 weeks to ripen. The tree should not be allowed to completely dry out during this time, or the fruit will fall off. High temperatures may also result in sunburned fruit and immature fruit drop.

PRUNING: After harvesting the fruit, you can either leave the tree to form branches (in which case the fruits in the next crop will be smaller in size) or you can cut it off 10 cm above ground level. The shoots that form around the base of the plant should all be removed except one, and this can be allowed to become the main trunk.

YIELD: A healthy plant can have 25-100 fruits a season, depending on growing conditions and cultural practices (usually about 30).

PROPAGATION: Babaco does not set seed but may be propagated easily from cuttings. A tall straggly plant can be revitalized by cutting it off about 200 mm above the ground in Spring. It will promptly resprout. Leave 1 or 2 sprouts to develop into new fruiting trunks. The old trunk can be used for cuttings by cutting each into about 30 cm lengths, each with at least one auxiliary bud. The cuttings should be dipped in fungicide and the rooting end dipped in a rooting hormone. The cuttings are then set vertically in sand or sandy loam to form calluses. With the first signs of roots and the beginning of new leaves, they can be planted out, about 200 mm below ground level.

HARVESTING: Fruit is normally harvested in Oct-Dec and should be removed with clippers. Fruits harvested half yellow will ripen indoors at room temperature.

TRANSPORTABILITY AND PACKAGING: The ripe fruit should be placed stem down in a container to prevent sap running over it. When picked 30% yellow, the fruit has a shelf life of up to 4 weeks.

PESTS AND DISEASES: It is important to start from virus free material. Overwatering and too much nitrogenous fertilizer may induce Phytophthora root rot. If this happens, plants can be propagated from portions of the trunk as above. Fungal diseases can affect the leaves in moist humid conditions. Plants can be affected by powdery mildew and yellow mosaic virus. The major pests affecting the Babaco are the two spotted mite, the strawberry mite and the broad mite. Control can be difficult because most miticides are phytotoxic to Babaco leaves. Predatory mites can give reasonable control. Thrip can cause superficial skin blemishes. There have also been reports of nematode infestation. Slugs and snails can damage the fruit.Some plants could suffer from collar rot in cool wet conditions.

COMMERCIAL POTENTIAL: Babaco was promoted and planted in parts of Australia in the 1980’s, but root rot, pest and disease, and low market prices saw a reduction in the area grown. They are grown on a small scale commercially in New Zealand and the Middle East. Because most growers send their Babaco to market green, buyers could be disappointed with the flavour. The low natural sugar content has resulted in serious doubt about the fruit’s consumer acceptability, as it would have to compete on the Australian market with the sweeter flavoured papaw. The most successful commercial plantings in Australia have been in shadehouses which provide protection from wind and hail. However, the low fruit prices may negate the capital intensive greenhouse/shadehouse planting. Some Babaco is grown in New Zealand and exported to Japan, while Ecuador exports to the US, Belgium, Holland and Switzerland. 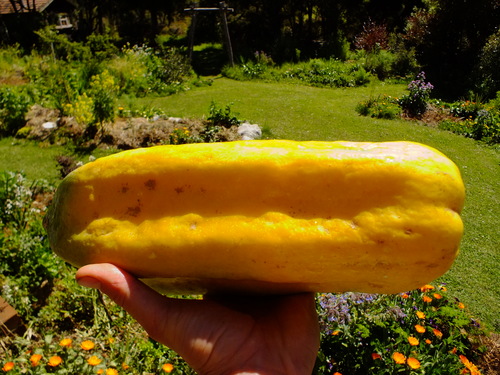 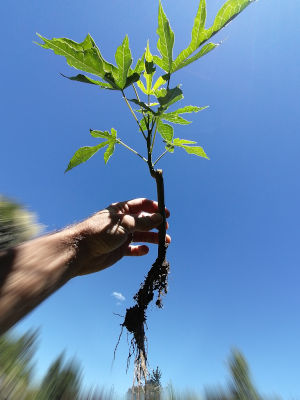 Details  Propagate and grow your own babaco plants quick and easy with stem cuttings. Simply place the cutting 1 third into the soil (right way up) and keep damp in a sunny sheltered warm location.

Details  We get a number of frosts each winter but generally not lower than -5 Celsius. This poses a challenge for growing certain plants, but with the right techniques, some clever designing and careful placement of sensitive plants it's amazing what's possible.
Tags    frost  climate  sub-tropical
Learn more