Details  First plum of the season (December in North Canterbury). Japanese of medium size
Price  $3.00  Each
Price for 4 or more  $2.50  Each if you buy 4 or more
Tags    plum  scion  grafting
Only 8 in stock Order Related info 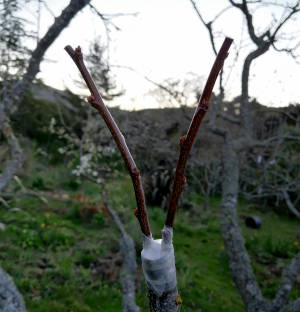 Scions of desirable species must be grafted onto a suitable, compatible root system or ultimately the graft with be rejected by the host tree.
The roots determine to size, growth rate and suitable soil conditions for the tree while the scion controls the flowers and fruit type and timing.
Most are only self compatible and so apple must be grafted to apple but as usual there are exceptions such as almonds onto peach.
grafting

Details  Japanese plum of medium size, with purple black skin and dark red sweet, juicy flesh. Ripening mid to late season.
Price  $3.00  Each
Price for 4 or more  $2.50  Each if you buy 4 or more
Tags    plum  scion  grafting
Only 8 in stock Order Related info

Grow your knowledge of fruit tree cloning through the ancient art of grafting. Learn by seeing and doing with hands on examples and one on one tuition and explanation. We will cover: