Details  Progress has been made on the upgrade of our chook and pig shed. The overall objective is to reconfigure the north facing side of the building as under cover growing space that we can rotate the chooks through.
Tags    Construction

The weather boards on the exterior walls of the house were looking tired and required patching in a few places. Also, white was not our favourite colour.
Rather than continue to patch new problems and run on the painting treadmill we decided to go for a more serious and long term solution. After much consideration and deliberation we settled on colour coated corrugated steel. Long lasting, easy to install, made of recycled steel (or can be recycled) and available in a range of non-white colours.
The end result looks good and should last for some time.
progress  house  weather  construction

As the number of chooks steadily increases so too does the need for housing.
In attempt to prevent the family of bantams from visiting our garden everyday we decided to resurrect the old shed down the far end of the farm.
Click the photo to see before and after
March 09, 2010
Chickens  Construction  Renovation

Details  Combining the popular parmaculture herb spiral concept and the desire to squeeze the maximum amount of edge into a given space, this excavated spiral will serve as an in ground water catchment feature and plant based sun trap with additional aspects such as shaped earth seating and potential fire 'pit'
Tags    earthworks  spiral  construction  water
View 5 photos 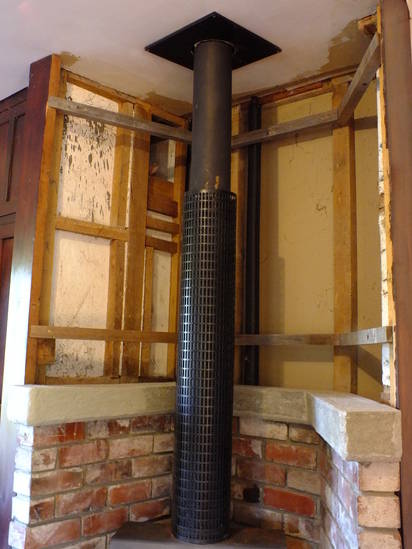 Details  Another project that can finally be crossed off the to-do list. The earthquake in November 2016 caused cracking in the brick wall behind our fireplace. While it was still standing and looked ok we were not happy about having this unstable stack of bricks there waiting to come down. I decided to remove most of them before another quake brought them down and caused damage to the hot water pipes that passed through to the log burner. It also allowed for the insulation of these pipes which had foolishly never been done in the first place.
The project required carefully chiselling the bricks apart and reducing he height of the wall to a satisfactory level. Than a concrete bond beam was poured, encasing the top layer of bricks, locking it all together. Finally, after adding some additional timber framing the opening was covered by mini corrugated sheet metal.
Tags    construction
View 3 photos

New roof for the guest house

The revitalisation of the guest house has been under way for some time but a major milestone has been reached - the new roof is going on.

I had been putting it off for as long as possible (excuses such as waiting for chimney were used) but with summer waning it is clear the leaky old iron needs to go.

This project makes use of most of the recycled concrete roofing tiles I got back before we purchased the property.
Roof  Tile  Construction

After hand milling macrocarpa tree with electric chainsaw I was looking for a project to utilise the rugged timber and decided to create a rugged arbour behind the house to improve the look and feel while usefully supporting some deciduous fruiting vines, the hardy kiwi berry.

This area had never really been well used, despite being so close to the house and easily accessible via the concrete pathway. Part of this project involves improving the productivity of garden.

After coming up with a suitable plan there was a decent amount of work clearing the existing plants and attempting to eradicate the twitch grass. I imagine this is going to take several passes. At this stage it has been sown in a cover crop for winter.

Concrete footings were cast with galvanized metal brackets to create a sturdy base, elevate the posts to keep them dry and make any future repairs reasonably easy.

Final phase is the planting of the vines (waiting patiently in pots) and training them up and over the arbour frame.
construction